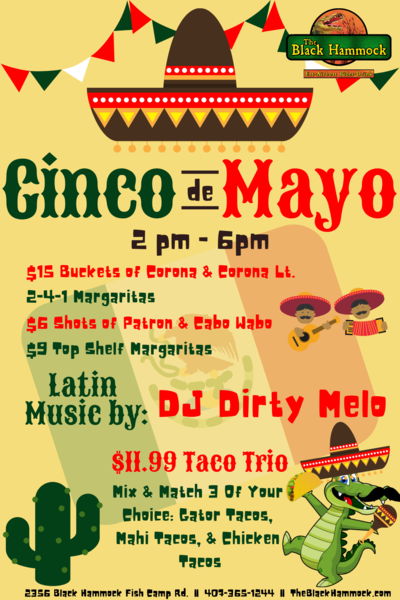 Cinco De Mayo is the Mexican holiday that celebrates Mexico's victory over France in the Battle of Puebla in 1862. Mexico was deeply indebted after years of internal strife and French ruler, Napoleon III, took it as an opportunity to take some of Mexico's land for France. Though the Mexicans were outnumbered 3 to 1, they managed to hold their ground in Puebla de Los Angeles, a small town in East Mexico. This battle did not end the Franco-Mexican War. However, it was a huge symbolic victory for the Mexican government and strengthened the resistance movement.

To this day, we use Cinco De Mayo as a way to celebrate Mexican culture and heritage in the United States. Black Hammock is celebrating with airboat ride specials, food, drinks, and music in the Lazy Gator Bar. We hope you will celebrate with us and enjoy the great specials we are running all day long. For more information, visit TheBlackHammock.com/CincoDeMayo

Popular tags on this blog