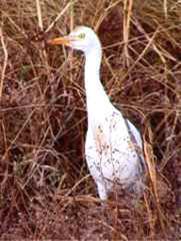 Other Names: black curlew
Length: smallest member of ibis family; 19-26 in.
Wingspan: about 38 in.
Weight: to about 28 oz.
Age: one reported in Russia at 21 yrs.
Voice: nasal grunting or series of guttural notes
Food: mostly crayfishes inland and fiddler crabs along the coasts; also snakes, grasshoppers, insects.
Color: plumage mostly chestnut with metallic gloss appearing black at distance; legs gray or green-black
Nest: platform of sticks on ground or cattail marsh or in trees up to 10 feet 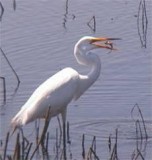 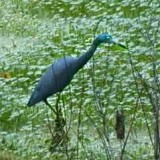 Other Names: plume bird
Length: 27-32 in.
Wingspan: about 46 in.
Weight: may be over one lb.
Age: one banded bird found after 12 yrs.
Voice: generally silent but utters guttural croaks and low clucking sounds
Food: has characteristic manner of dashing or lurching when feeding; rakes bottom of shallow water to stir up prey; small fish, frogs, tadpoles.